The Detroit Concert Choir (DCC) is Detroit’s international award-winning vocal ensemble. Honored as CHOIR OF THE WORLD, this ensemble is celebrated for exceptional programming and distinctive performances.

The choir is in its 33rd season and has been under the artistic direction of Dr. Michael Mitchell since June 2019. 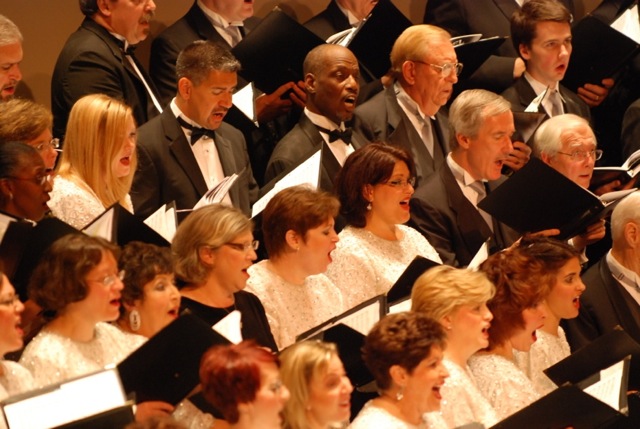 The 75-voice vocal ensemble is an auditioned group that is dedicated to promoting choral music of high artistic merit and cultural enrichment for our community. The Detroit Concert Choir rehearses August through May in alternating locations, including high school choir rooms at in Grosse Pointe and Birmingham. Auditions are typically held in August. Approximately 10-12 concerts take place each season, including an annual 4-concert series and several collaborative and community performances. Concert venues include historic churches and contemporary auditoriums throughout Detroit and the surrounding areas.

DCC was founded in 1987 by Gordon Nelson (1931-2015), whose passion for choral excellence and desire to enhance the lives of others through music became the foundation for a group that blossomed into a local, national, and international pacesetter of choral music.

Throughout our three-decade history, the Choir has performed hundreds of concerts in our communities, presenting exciting performances to local audiences. Comprised of musicians of varying ages, backgrounds, and walks of life, singers gather from over 35 communities and perform in some of the Detroit area’s most beautiful and historic churches and performing arts centers. classical works for chorus and orchestra.

In addition to the choir’s own concert series, the ensemble collaborates with fellow performing artists. Within the last few years, we have joined in performances with the Detroit Symphony Orchestra, Sarah Brightman, the Michigan Sinfonietta, the Oakland Symphony, and the Oakland University Symphony Chorus, as well as Polish folk choirs and dancers and highland dance students.

DCC has proudly represented the United States with its rich musical heritage to audiences from around the world. The choir is the recipient of eighteen national and international honors in esteemed music conventions and international competitions, and won the prestigious “Choir of the World” title at the Llangollen International Musical Eisteddfod in Wales. DCC also received the nationally acclaimed Margaret Hillis Award for Choral Excellence based on artistic excellence, strong organizational structure, and a commitment to outreach, educational, and culturally diverse activities. Highlights also include singing pops and classical programs with the Detroit Symphony Orchestra and performances at National, Regional, and State American Choral Directors Association Conventions attended by top conductors and educators throughout the country.

Keep the music alive! Join our Circle of Friends and make your gift to the Detroit Concert Choir today! Your donation enables us to delight and enrich the lives of all who appreciate the magic of beautiful choral artistry. Together we make the music.

In addition to our concert series, our ensemble seeks to enrich the cultural offerings for the city by singing for community events and by collaborating with fellow arts groups such as: children's choirs, dance groups, young instrumentalists and more!