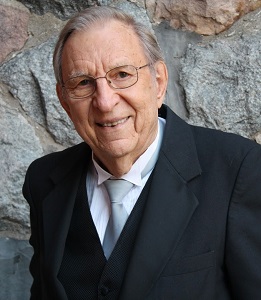 Joe Wanchik is President Emeritus and Chairman of the Annual Giving Campaign of the Detroit Performing Artists, Inc./ Detroit Concert Choir. Joe joined the Choir in 1986.
He was minding his own business in the hot tub at Vic Tanny’s when an outgoing young lady invited him to a concert. He went to the concert and the music was so beautiful he thought that he had died and gone to heaven. Joe jumped at the chance to audition and has now been a singer, board member and volunteer of the Detroit Concert Choir (DCC) since 1986. For the first decade, when Joe belonged to many singles clubs and organizations, he was the top seller of concert tickets. Joe broke his own record by selling 128 tickets to one concert! Since then there is not a person that Joe knows that does not associate Joe with the DCC! At the health club, people ask Joe about the choir. When they see Joe, they think DCC! Joe served as the president of the Detroit Performing Artists, the sponsoring organization of the DCC, for seven years. It was during Joe’s presidency that the DCC won the Choir of the World title in 1996. He has been in charge of the Annual Giving Campaign since 1992 and enjoys getting to know all of the donors and writing them personal notes of gratitude. Joe has been on 7 competitions with the choir including trips to Wales, Spain, Ireland, and Italy. Joe also plays the mandolin and guitar for concerts and events. Joe is an advocate for the handicapped, having been a polio patient himself at age 20. He spent his entire 35-year career at the Rehabilitation Institute of Michigan. Joe majored in occupational therapy and after 2 years in that field was asked to develop an Orthotics Department where he used his ingenuity to invent devices for the handicapped. His most famous device is the Wanchik Writer, allowing quadriplegics to write and type. Our founding director Gordon Nelson once quoted, “Joe is an inspiration to me, our staff and our choir. He has a nurturing and giving spirit and a genuine love for this choir and the people it serves.”

Welcome to our 34th season, "Just Sing!" We've planned a series of virtual performances so you can enjoy the DCC from home! We're sharing music with friends on our Facebook page,  YouTube Channel, and Instagram.