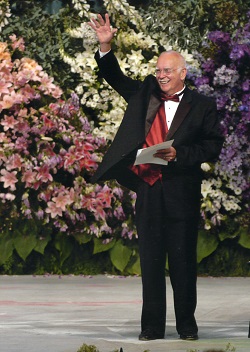 Gordon Nelson, Founding Artistic Director of the international award winning Detroit Concert Choir, built a truly great choral ensemble by challenging its members to reach beyond their own expectations to achieve extraordinary goals.
In 1987, Mr. Nelson created the group to enhance the lives of others through music and to provide a venue for musicians, professional and amateur, to share their talents with the community. Mr. Nelson's desire to enhance the lives of others through music became the foundation for a group that developed into local, national, and international pacesetters of choral music.
Under Mr. Nelson's leadership, the Detroit Concert Choir contributed greatly to the cultural vitality of Metropolitan Detroit area, presenting 27 inspiring concert seasons, highlighted by performances with the Detroit Symphony Orchestra and at National, Regional, and State American Choral Director Association conventions.
Mr. Nelson's passion for excellence and his extensive musical knowledge led the Detroit Concert Choir to eighteen national and international honors, including the "Choir of the World" title at the Llangollen International Musical Eisteddfod in Wales and the Margaret Hillis Award for Choral Excellence. Mr. Nelson has led the Detroit Concert Choir in eight international competitions: Llangollen International Musical Eisteddfod, Wales (1991, 1993, 1996, 2006); Norwich-Sligo International Choral Festival, Ireland (1994); Tolosa Choral Contest, Spain (1998); Spittal an der Drau International Choral Contest, Austria (2001); and Seghizzi International Choral Competition, Italy (2004).
Mr. Nelson's musical background includes a Bachelor of Arts degree from Wheaton College, a Master of Education degree from Wayne State University, and a Master of Music degree from the University of Michigan. Early in his career, Gordon was a tenor soloist and served as the director of several church choirs. From 1961 to 1979, Mr. Nelson served as Choral Director of Denby High School in Detroit and established a high standard of excellence that included international travel and award wining performances. Mr. Nelson was an active member of the American Choral Directors Association, Chorus America, and the Tuesday Musicale of Detroit. He served as President of the Rita Guy Christian Music Foundation for 25 years.
“Gordon Nelson makes music with the Detroit Concert Choir that one simply listens to. There is a feeling for sound, melody, meter, effect, and spiritual presence, there is spirit and soul.”  ~ Artistic Jury - Spittal an der Drau International Choral Contest
"It was one of my greatest pleasures to know that through him (Gordon) and the Detroit Concert Choir, my music served as a vehicle for touching hearts around the world." ~ Jackson Berkey - American Composer
WRCJ Tribute to Gordon Nelson (Click to allow Flash to run on your browser):
“

Keep the music alive! Join our Circle of Friends and make your gift to the Detroit Concert Choir today! Your donation enables us to delight and enrich the lives of all who appreciate the magic of beautiful choral artistry. Together we make the music.

In addition to our concert series, our ensemble seeks to enrich the cultural offerings for the city by singing for community events and by collaborating with fellow arts groups such as: children's choirs, dance groups, young instrumentalists and more!